We use cookies to improve your experience. Cookie Declaration
ACCEPT ALL
TWCHE Support Ukraine With Swiss Red Cross.Learn more

Is it too Late to Invest in Cryptocurrency? 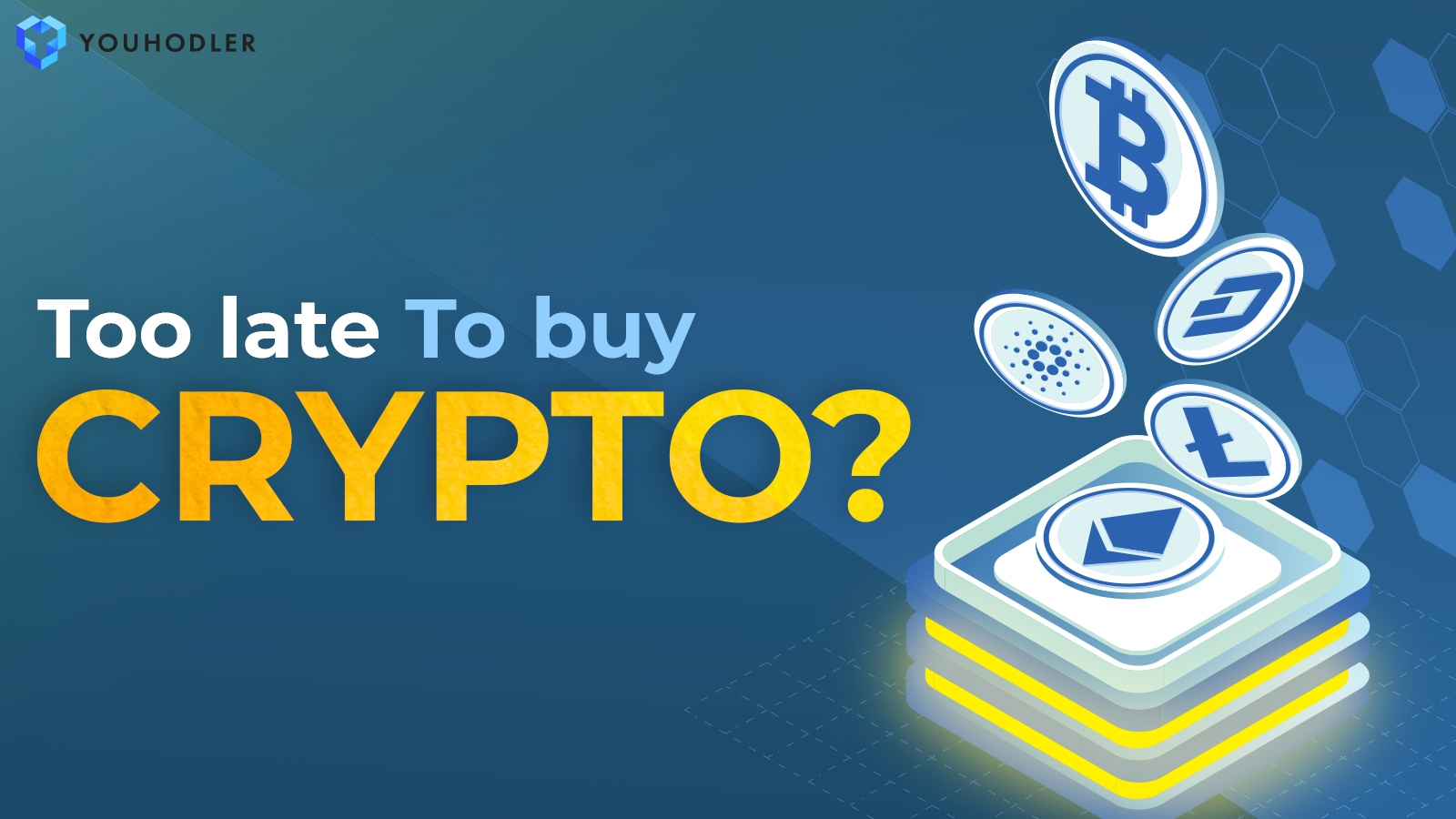 In this century, cryptocurrency emerged as a topic that could potentially change the way people deal with transactions, especially fiscally. Since the ever-elusive Satoshi Nakatomo’s White Paper on Bitcoin (BTC)  appeared in 2008, the notion of cryptocurrency has ballooned and made room for more cryptocurrencies to be created. These include the likes of Ethereum, Binance Coin, Solana, and so forth. All of these enabled an influx of users to be part of the system by either creating projects, utilizing them, or investing in them. The prices of these have ever since shot up, and potential investors might be worried that they are arriving too late to the party. However, here are five reasons that this might not be so:

5 reasons to invest in cryptocurrency now

1. Most innovative crypto coins are still in the early stages

From the seed of Nakatomo’s White Paper, a large and fruitful tree has emerged, with a lot of great talent involved. Throughout the world, digitization is becoming a priority, and some of the most talented software developers are filling numerous crypto roles. This digital shift has led to the creation of many innovative projects, such as  Decentralised Finance (DeFi), Non-Fungible Tokens (NFTs), and the transition from Free-to-Play (F2P) to Play to Earn (P2E) games.

The metaverse is also growing alongside the emergence of cryptocurrency and blockchain technology, as major players such as Facebook changed its name to Meta. On the latter note, NFTs and cryptocurrency, in general, seem to be a central figure in such a shift, with crypto projects such as Decentraland (MANA) and The Sandbox (SAND) paving the way. It is showcased with the skyrocketing prices of their native tokens as well, which mirror the popularity they have earned. Innovation in this space seems to have only just started, with no end in the immediate future.

The cryptocurrency market is volatile, and if one buys cryptocurrencies at the highest point, his and/or her investment can plummet if the price drops. However, if one zooms out and looks at the bigger picture, cryptocurrency has seen enormous gains over the past years, even when looking at the past year alone. When comparing Bitcoin to other assets, as one of crypto’s most popular advocates Plan B does on Twitter, it is easy to see why so many people are currently interested in the space given its impressive rally.

In 2021, BTC saw a 60% rise in price, while assets such as real estate, stocks, bonds, and gold either saw relatively lower gains or worse, a dip in price. This is not even comparing other stellar gains that other cryptocurrencies have seen, such as the over 500% Ethereum (ETH) made, as well as other projects with much larger gains. The prospect of making such a large sum of profit in a relatively short time is something which is seen as appealing, if not a once-in-a-lifetime opportunity.

Economists around the world have been sounding the alarm bells regarding fiat inflation problems which, in the short term, means that central banks around the world print more money, resulting in the decrease of their value over time for the average consumer. Bitcoin attempts to solve this issue, as its limited supply enables it to resist inflation, the latter of which could cause turbulent times if the economy collapses.

This is especially the case after the Covid-19 pandemic, where Governments—such as that in the US—printed more money to meet stimulus requirements. Furthermore, the US inflation rate has now risen to 6.8%, the highest it’s been since 1982. Investing in crypto might prove to be an alternative to inflation-prone fiat currencies.

4. Big corporations and personalities are getting involved

Cryptocurrencies have caught the eyes of large corporations and personalities which have an enormous influence in the world. One such person is TIME’s Person of the Year, Elon Musk. Musk has famously tweeted supportive and oftentimes controversial content about crypto on social media in recent years. Regardless of the division it often causes, it has led to increased publicity.

Other notable figures, such as Twitter’s former CEO, Jack Dorsey, as well Apple’s CEO Tim Cook, have all expressed their interest in the blockchain world, the former of which is known to be an advocate to shift the economy to rely on BTC. Moreover, there are various examples of large corporations investing in the crypto space, with Adidas releasing their own NFT collection and VISA buying a CryptoPunk NFT. There are many other notable figures and corporations worth mentioning which are increasingly getting involved in this space, so the appeal of cryptocurrency is spreading rather rapidly. This time around, everyone has his eyes set on the space.

Security and transparency are something that the crypto world promises to provide. One of the criticisms that Fiat usually receives is that it cannot be traced, such as when trying to analyze how government expenditure is utilized. With cryptocurrencies such as Bitcoin, this is different, as every transaction is recorded on the blockchain and anyone can access it.

Cryptocurrency is recorded in the blockchain, therefore, making it immutable. This can serve diverse sectors in the world, especially when it comes to poorer countries, as Cardano’s founder John Hoskinson highlighted in a Ted Talk (watch below). Given the handful of problems that cryptocurrencies can solve, it is hard to see that people would not bother with it.

How to Dollar-Cost Average with YouHodler

Matthew Sigel, Head of Digital Assets Research at the Van Eck Associates Corporation, still believes that Bitcoin is currently undervalued. One of the reasons he believes this is that the ratio of network value (which is the market cap of BTC) to the on-chain volume (which is the value of BTC transferred) is close to making a 3-year low. However, even if there does turn out to be a time where the crypto market takes a dip, one can always perform what is called dollar-cost averaging (DCA).

DCA is an investment strategy enabling investors to buy currencies across a period to reduce the impact that volatility has on the cryptocurrency which the users invest in. It is popular amongst investors since it removes the need to constantly monitor such prices and has the fear of missing out (FOMO) on a particular asset.

YouHodler can help you DCA with our quick and efficient platform. Buying Bitcoin and other top cryptocurrencies is extremely easy. Just follow these steps:

Alternatively, you could deposit fiat or stablecoins to the YouHodler platform and exchange those to a cryptocurrency of your choice. Choose regular purchase intervals to DCA properly!

The crypto space appeals to a range of people for its many potentialities and alternative solutions it provides them with. It is therefore not a surprise that even the common reader on the internet would be tempted to invest in cryptocurrency, and possibly be a part of the digital future. So take a look within. Do you want to sit on the sidelines as the new digital economy passes you by like the internet did two decades ago? The choice is yours!

The YouHodler Team is the collective mind of the platform. It's a hive of creativity and diversity in the form of one singular blog author. We are united as one.

Read next
YouHodler Adds Top Metaverse Tokens to the Platform

YouHodler Decentraland Treasure Hunt: The Results Are In!
What is Swing Trading?: Definition and Tips
What does ERC20 Stand For?
Dollar-Cost Averaging in Crypto Markets: Pros and Cons
ALL POSTS