We use cookies to improve your experience. Cookie Declaration
ACCEPT ALL
TWCHE Support Ukraine With Swiss Red Cross.Learn more

How High Can the Price of Ethereum Go? 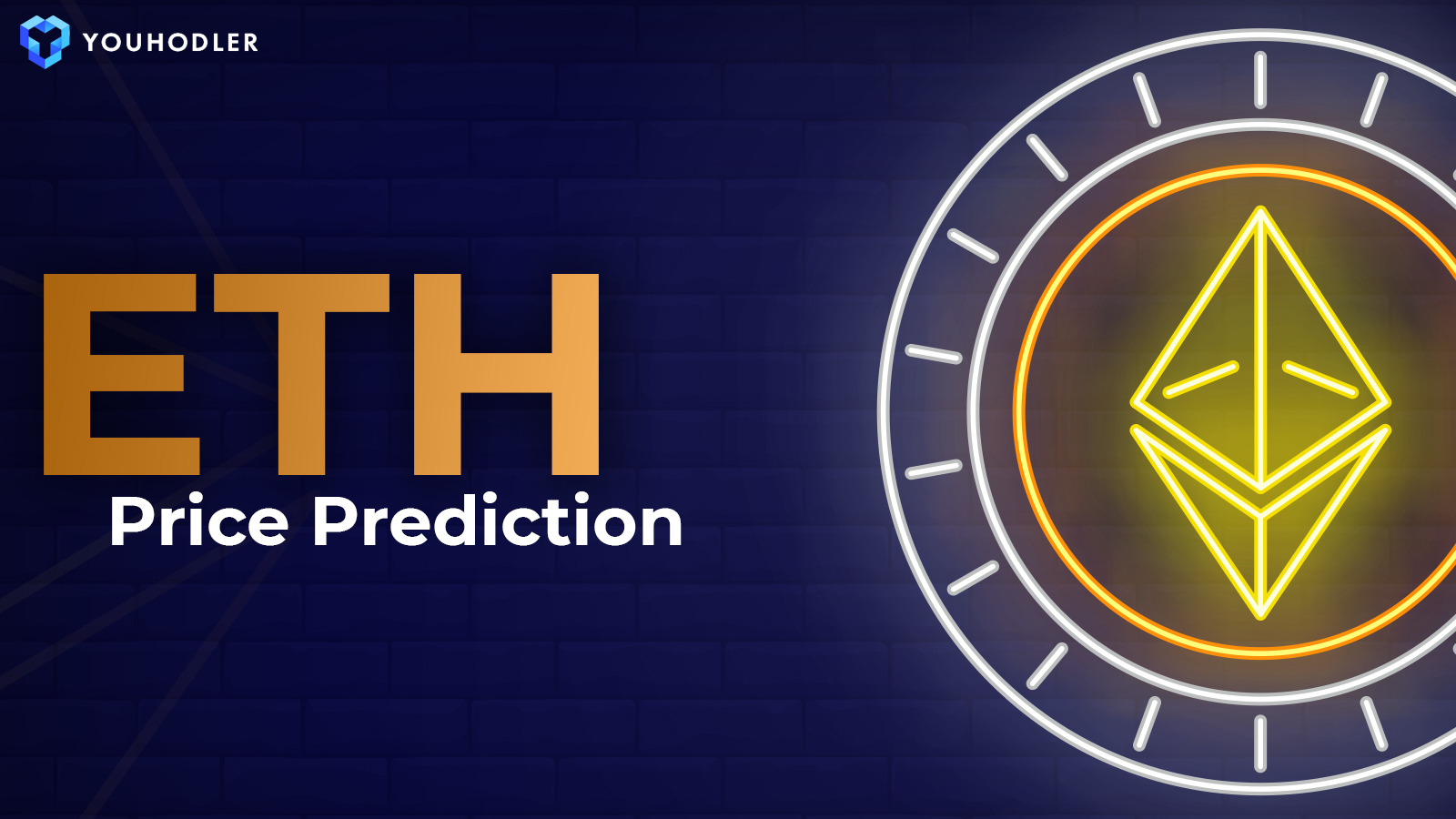 We get it. You're "into crypto for the tech.'' Let's be honest though. You are still interested in the profit potential of this technology (and that's ok). While we here at YouHodler aren’t fortune tellers, we find it interesting to analyze Ethereum’s past, present, and future. This gives us a better chance at understanding how Ethereum will react in the coming years. For example, key elements built on the blockchain like Decentralized Finance (DeFi), Non-fungible Tokens (NFTS), Decentralized Applications (dApps), and more will all contribute to positive ETH prices momentum in the short term. So if you came here looking for answers on why ETH will grow over time, you've come to the right place. But first, a little history.

In 2015, the Ethereum network went live after Buterin organized crowdfunding for the project, which proposed to allow smart contracts and proof-of-concept within its blockchain. This allowed other developers to create their apps on the Ethereum blockchain and diversify cryptocurrency’s use to make it more mainstream, creative, and accessible.

At first, ETH started trading at $2.80. Yet, the currency found itself trading at around $1 for a few months as a bear market ensued. In 2016, there was the creation of the Decentralized Autonomous Organization (DAO) for Ethereum, which was a set of smart contracts on top of the Ethereum blockchain. Yet, after members of the Ethereum community raised $150 million for the DAO project, hackers stole $50 million from the system. This led to an Ethereum hard fork, reversing the transactions and returning the lost funds. A controversial decision. Indeed, this led to a price dip, which from a high of $20 saw it tumbling down to the range of $6.

The bull run of 2017 came by, which saw astronomical gains for Ethereum. Thanks to the Initial Coin Offering (ICO) craze. ICOs are like Initial Public Offering (IPO). The only difference being that the former is for cryptocurrency projects, while the latter is for traditional markets.

To take part in ICOs, one needed to buy Ethereum. This of course resulted in the price going up to mouth-watering amounts. The cryptocurrency had so much influence in this space that in January 2018, the price shot up to around $1,400. A year before it was trading at roughly around $10.

But since this was still a developing space, developers created many shady ICO projects, and a price bubble formed. From a legal perspective, many asked questions as some amateur investors lost significant investments. Despite this negative press, Ethereum persevered with the drama and rallied in later years.

YOUHODLER PRO TIP! Read until the end to learn an easy way to buy ETH
‍

How did we get to today’s current ETH price?

As the crypto space entered into a bear market, the interest in Ethereum was still simmering and ideas started to flow in. Decentralized Exchanges (DEXs) such as Uniswap and SushiSwap were born, which use an Automated Market Maker (AMM) within their project. This means that the underlying liquidity pools which manage the exchange of coin-swapping are run by smart contracts rather than the order book system as is known.

By doing this, it eliminates third-party fees and since it is run by smart contracts, it is less susceptible to manipulation. DeFi and Dapps emerged as intriguing notions and projects. These ideas help to reimagine the way we see traditional finance and were some of the major catalysts of the 2021 bull run.

More projects later emerged. For example, OpenSea, Axie Infinity, and Unstoppable Domains. OpenSea was the first major marketplace for the minting and exchange of Ethereum Non-Fungible Tokens (NFTs). This later resulted in the NFT boom of 2020/2021. Axie Infinity led the shockwave that happened within the gaming sphere, where the shift from Free-to-Play (F2P) to Play-to-Earn (P2E) surfaced since it allowed users to earn cryptocurrency by playing the game and exchanging digital assets (NFTs). Finally, Unstoppable Domains aimed to remove the monopoly that domains had by introducing new domain names which users buy for one time and get to keep, with various domain names ending with letters such as ‘.nft’, ‘.zil’, and ‘.crypto’.

One could go on about how many other intriguing projects came from Ethereum. It is no surprise, then, that Ethereum hit $5,000 at the end of 2021, while it has now gone down to roughly $3,000 with a market cap of around $350 billion. Competitors have emerged as well.

While Ethereum is criticized for its high gas fees (GWEI), other projects such as Binance (BNB) and Solana (SOL) boast much lower fees. This makes it easier for the average person who is getting into crypto to experiment in the crypto sphere while not wasting money on gas fees until one gets used to how blockchain transactions work.

Ethereum price prediction for the future

So, what is next for Ethereum? Developers at Ethereum have been upgrading the system since the day of its conception. Some predict a bright future for Ethereum, such as EY’s global blockchain leader and CoinDesk columnist Paul Brody, who said

Brody states this is because he is sees “three key trends” which are gaining traction in the sphere, namely DAOs, DeFi, and finally, their shift to proof of stake and the broader shift of users from Layer 1 to Layer 2, making it cheaper to use.

What does this mean for the ETH price? Standard Chartered, an investment bank, states that Ethereum’s long-term potential looks optimistic, as they value ETH between $26,000 to $35,000. Others, such as JPMorgan, said that Ethereum’s dominance in DeFi is “far from a given”. Some say that ETH’s potential to change the digital economy is so powerful that it might actually “flip” Bitcoin, meaning that it would be the cryptocurrency with the highest market cap out of all cryptocurrencies.

Predictions as to how the market will react, however, need to be taken lightly. Although some of the research conducted is very detailed, it is up to you to make sure to do your research (DYOR) and that you make the best decision for your future.

How to buy ETH on YouHodler

There is no doubt that Ethereum has caused a major earthquake in the blockchain world, making eyes gaze towards the blockchain world, and invest in it. The innovations of Dapps that were created thanks to Ethereum’s conception are seen, as they paved the way for the creation of other applications. The large-scale cultural influence of NFTs and the life-changing possibilities that DeFi presents is undeniable and would not be possible without Ethereum. Whether this is still a fad or a permanent fixture of society is yet to be seen, but the evidence points towards the latter. Although no one can predict where the price of ETH will go, plenty does not want to miss out on the digital shift that is currently happening.

If you want to invest in ETH, use YouHodler to buy ETH and other cryptocurrencies.

The YouHodler Team is the collective mind of the platform. It's a hive of creativity and diversity in the form of one singular blog author. We are united as one.

Read next
YouHodler Adds Top Metaverse Tokens to the Platform

YouHodler Decentraland Treasure Hunt: The Results Are In!
What is Swing Trading?: Definition and Tips
What does ERC20 Stand For?
Dollar-Cost Averaging in Crypto Markets: Pros and Cons
ALL POSTS